A decade of healing, but a wound to never forget…

The following is a post as part of Project 2996, in which I originally participated two years ago. I have decided to post it for the third year in a row because doing so underscores how much I think it is important that we don’t forget there are faces, there are stories, there are left-behind loved ones to every name of every victim that was taken from us on that fateful day TEN years ago.

I’ve tweaked it a bit, after having received a book called “REQUIEM: Images of Ground Zero” in the mail from Gary’s sister, Christine,  who read my 2009 blog post. (Christine, if you ever read this, thank you sooooo much for sending it to me…it had gone to an old address of mine, but it ended up getting to me a bit later!!!)


In the decade that has passed, so much has happened in this country. And to each one of us on a personal level. We should always keep in mind every day how very fragile life is. I would appreciate all of you to read below and think for a moment about the man whose name I was given in the original project efforts, and the 2,995 others whose names are just as important, including those on United Flight 93 that went down by Stonycreek Township, Pennsylvania, near my husband’s hometown of Latrobe.
——————————————– 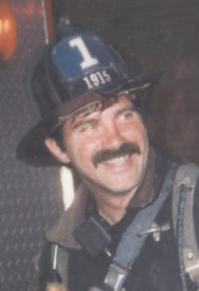 Ten years ago, the nation was rocked to its core. At the hands of hateful cowards. At the cost of nearly 3,000 hearts, minds and bodies. 3,650 days have passed, and so easy it is for many of us to move on. To focus on the patriotic spirit that rose out of that grim, ill-fated September day… to harness our own hatred in the name of the U.S. of A. and aim it at the sources of evil.
But it has not been easy for those who were left in the wake of the tragedy, left to deal with a senseless loss of someone they loved, someone who loved them. Time might heal, but healing is hard to do when the loss always feels like it just took place yesterday. And time doesn’t bring back any one’s father, mother, sister, brother, husband, wife or best friend. 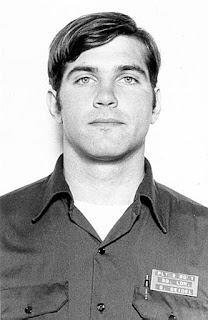 Firefighting was in his blood. His father had walked before him; one of his brothers walked beside. All three Geidels shared a rescue company, Rescue Co. 1, which dates back to 1915 as the first rescue company to be established in the United States. Unfortunately, Gary was no stranger to responding to terror attacks; when the Twin Towers were bombed in 1993, Gary and his company were there, eager to save lives and help others.
His retirement from public service was a mere 20 days away when the calendar turned to September 11 in 2001. He awoke that morning, ruefully told his wife of almost 11 years that he put in for overtime and headed to the firehouse. But not before returning to give the love of his life another kiss and hug. His last kiss and hug.
Gary was a 6 ft. 2 romantic, avid birdwatcher, Eagle Boy Scout, former Marine and a member of neighborhood softball and football team. He could fix parachutes, sew costumes, whittle gifts for loved ones and make toys for his daughter, Tillie. (Since I posted this the first time, Tillie has contacted me through blog comments and on Facebook, and each time it has warmed my heart that she has been touched by this small shout-out to the noble acts of her dad. Tillie, thank you for reaching out. And best wishes to you and your family!!)
I’m glad I’ve come to know Gary P. Geidel, who some called “Mule Bone.” 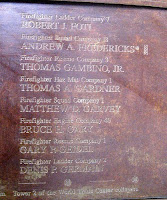